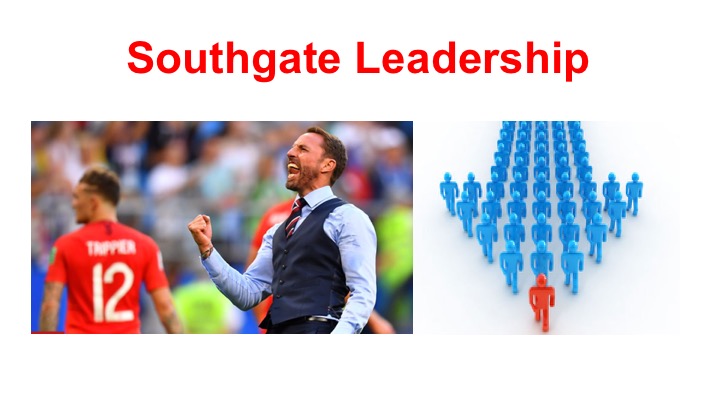 I have decided to change the scheduled blog on this weeks management series.  I was going to add another blog on our dealing with conflict series. However, there is a situation currently taking place in our national sport, Football that must be explained.  England is in the semi-finals of the World Cup, and the country is about to go crazy as we haven’t been there since 1990.  Personally, it is fantastic to see such a tremendous group of young players working as a team and doing so well.  What I am so impressed with is though is Gareth Southgate and his approach to highly effective leadership.

I know he’s labelled as the England Manager but watching Southgate I think his job should be renamed to England Leader.  So what is it that makes him such a formidable leader as opposed to a manager:

Essence – Southgate’s approach has been all about change.  When he took over the team were recovering from a humiliating defeat by Iceland. Managers like stability, and we have seen many England managers keep the same team over and over again.  He looked at this as a massive opportunity to change things, a classic approach from a formidable leader.

Culture – His approach to this is to shape the culture, previous England teams have been based on individuals, often we had players playing on their world reputation and former England Managers executed this.  He shaped a whole new culture where players were working as a team, not for themselves.  The feeling from the team perspective is evident. It’s not about one or two players it’s about the team and players feel if they haven’t played well that they have let others down.  Moreover, the culture of players taking individual responsibility is classic in formidable leaders.

Credit – I have need heard Southgate take credit for anything, he gives credit freely but never takes credit.  Another classic example of a formidable leader.

Decisions – He facilitates decisions not just makes them.  Players have an opportunity to get on board with the decision-making process and this is why you see so many players taking leadership roles in the game and making decisions themselves.  A fantastic example of a brilliant leader allowing players to do this.

Vision – He sold a vision to the players and the whole country.  They have a vision statement ‘Believe’ so powerful if players buy into the process. There is no way England are the most talented team in the world cup, other teams are no doubt better and have better players.   However, England under Southgate have a vision, and they believe they can do it.  A massively powerful statement and state of mind.

Whatever happens on Wednesday, I believe Southgate has done a fantastic job.  He has taken a young group of players and gave the whole country believes that they can win.  Moreover, he has demonstrated what we can do as leaders if we put our mind to it. These are fantastic leadership skills, and if incorporated into your own life, massive improvements can be made. Good luck England and whatever happens, your leader is excellent.

Ralph Moody is the founder of Target Training and specialises in trainer and management development.  You can read more about him here.  To see courses where Ralph delivers see our website here.